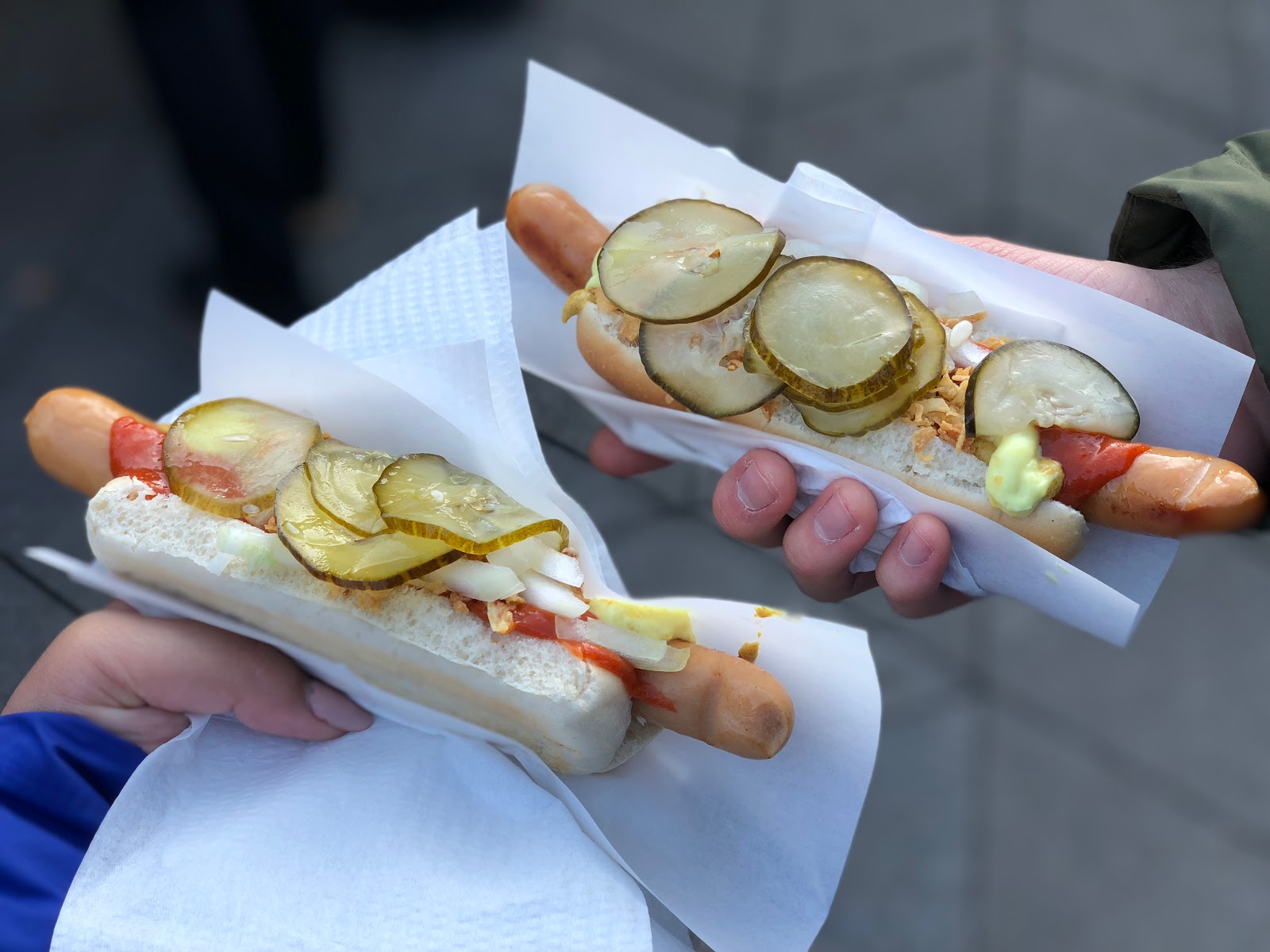 Here we are again – another European city and another fantastic food tour. We were in the beautiful city of Copenhagen for Jessica’s birthday weekend and couldn’t pass off the opportunity to explore Denmark’s culinary scene.

When finding the start point for Sandeman’s New Europe Tour, we joked about the hotdog stands which are dotted around the city being a stop on the tour. 10 minutes later, and there we were enjoying something which definitely shouldn’t be judged on its cover. These hotdogs are originally German, but have become the most popular street food in Denmark. Open all day and most of the night to capture the spill overs from the many bars and clubs, they were amazingly delicious.

There were raw onions, cooked onions, ketchup, mustard and pickles making for soft, crispy, hot and cold all in one mouthful. It’s hard to find a quick and cheap snack in this affluent city but this is definitely the way to go and it was a fantastic way to kick off the tour. 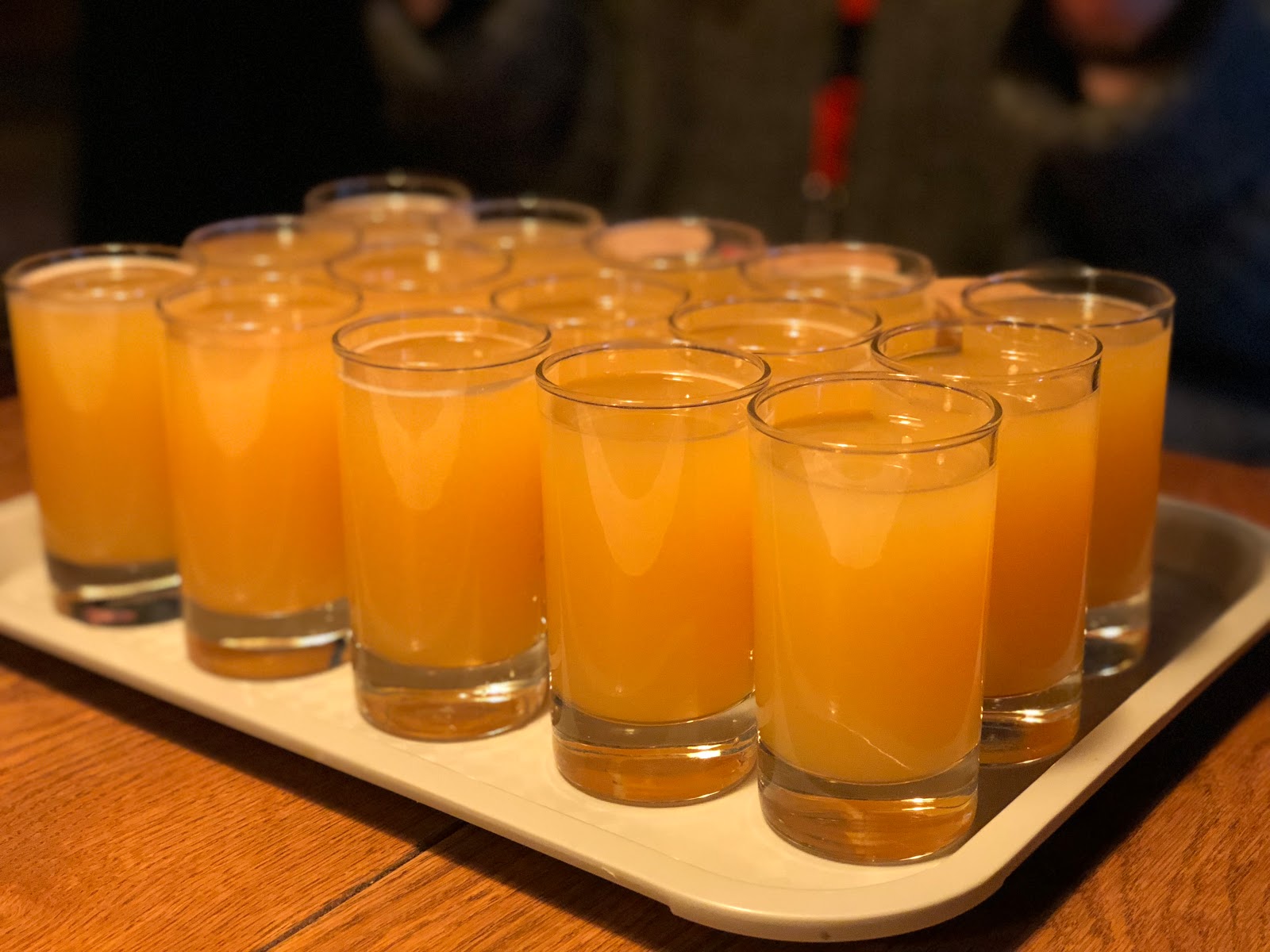 Next up… beer! In Tap House there are 61 beers on tap which are all local to Copenhagen. The first of two tasters was an IPA and the second was a complete opposite in a coffee like stout. Drinking is key to the Danish concept of Hygge – locals mostly drink to relax and not get drunk. They have a deep care for the quality of the drinks and drink slowly to savour the taste and enjoy good company. 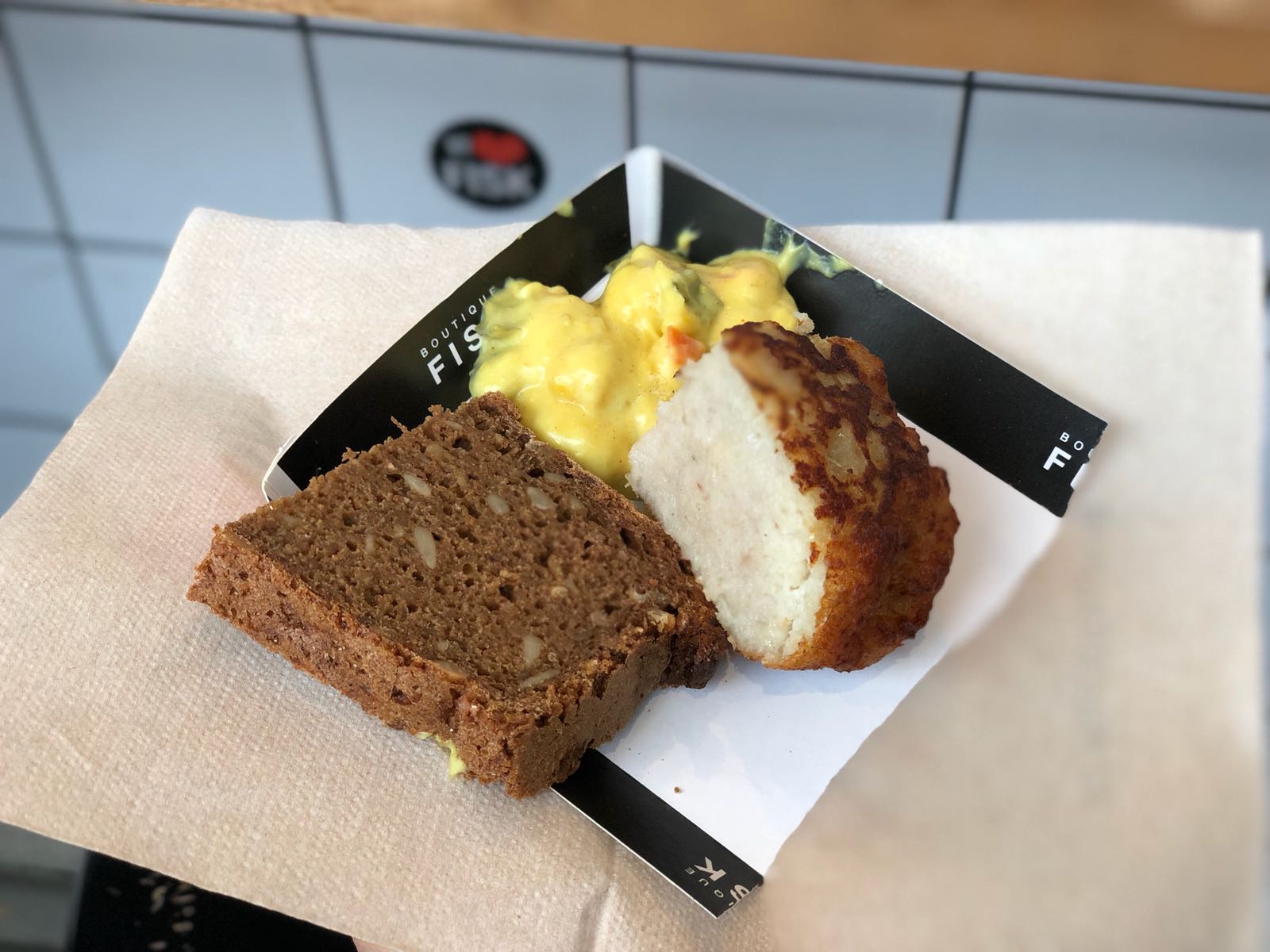 We were lucky to stumble across Torvehallerne markets just around the corner from our hotel when we first arrived. After a wander around and one of the best coffees we’ve ever had at The Coffee Collective, we were delighted to be back a few hours later on the tour. These food markets go way back to opening in 1889 but reopened as the glass containers they are today in 2011.

With everything from cheese, Danish pastries and sushi, we tried their famous smorobrod (rye bread) with curry dip. It was spicy, melt in the mouth and completely perfect. 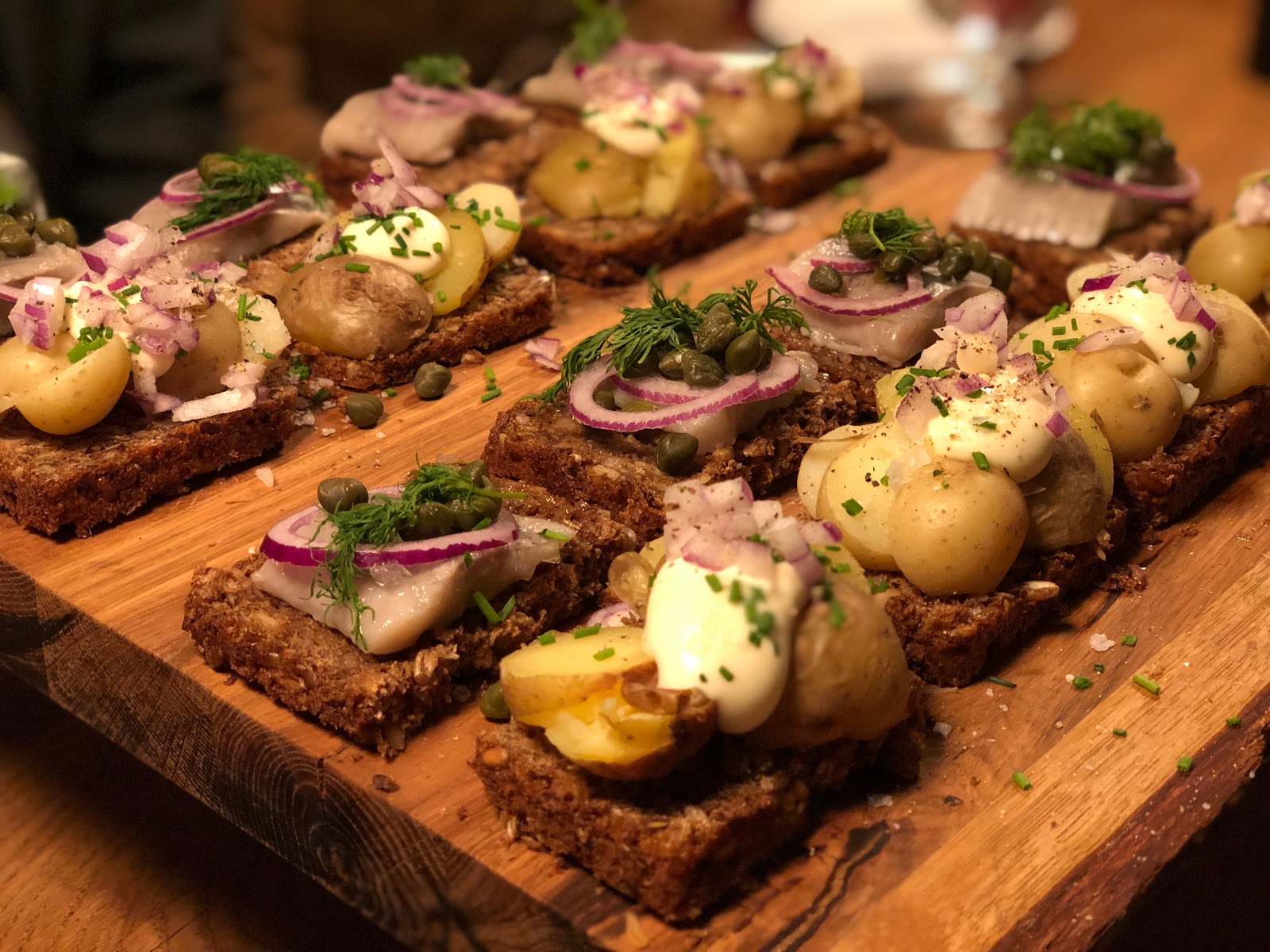 That wasn’t the last of the rye bread and that came as no surprise when we found out that on average a Dane consumes 30kg of it every year! It’s often made at home to take out to school or work with simple ingredients on top. However restaurants like to jazz it up and at our next stop, Skaal, they did just that.

With a board of smorobrod topped herring & capers and potatoes & eggs, we were treated to this famous Danish delicacy yet again. ‘Skaal’ translates into English as ‘cheers’ and more IPA’s followed out to enjoy alongside. 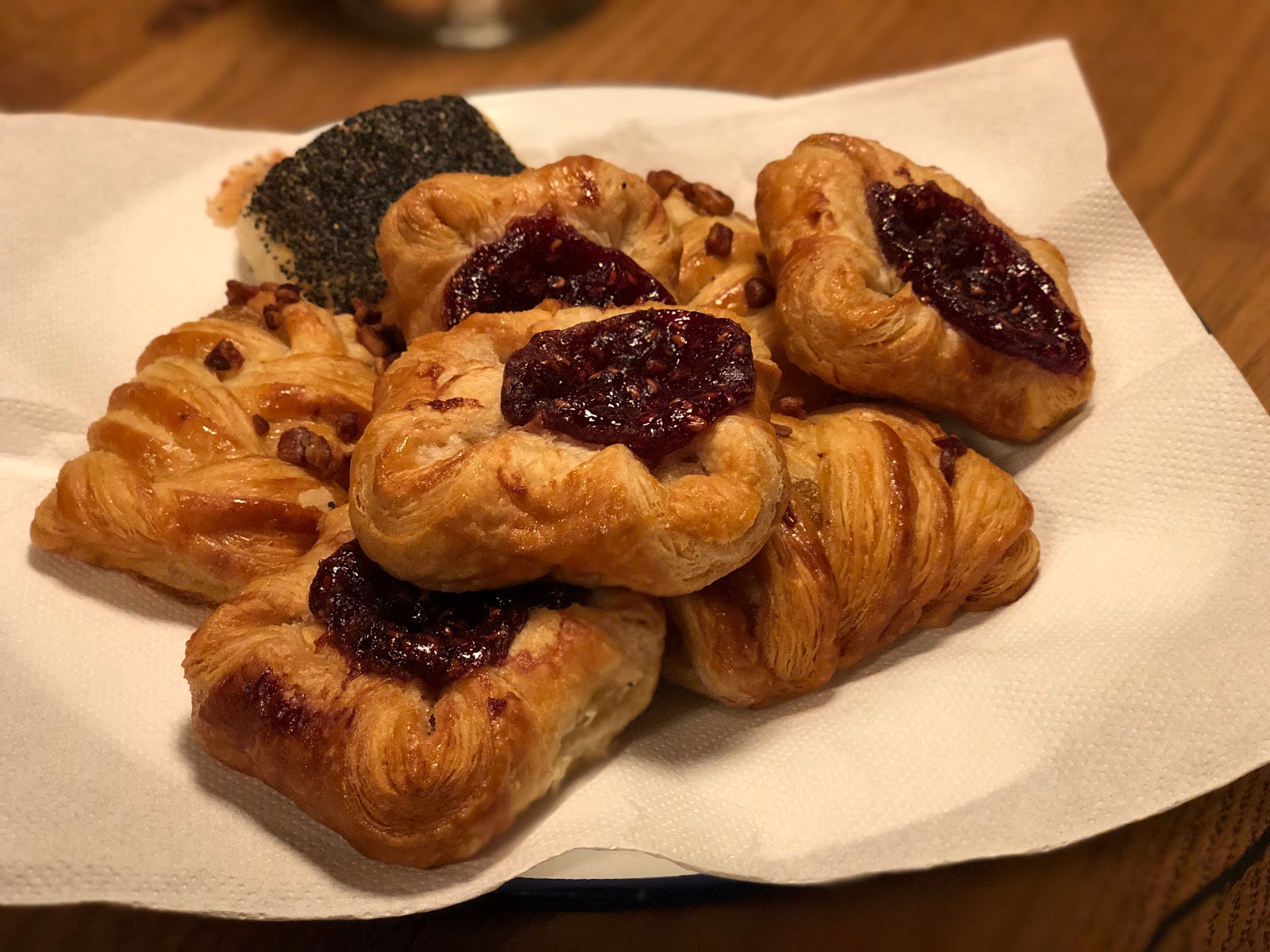 What would a tour of Copenhagen be if we didn’t end with Danish pastries? These often used as an afternoon snack was the perfect way to end a fantastic tour.

Shorter than most tours we’ve done in other cities at around 2.5 hours, we were in walking distance between each stop and managed many new parts of Copenhagen along the way. Our guide, Laura, was amazing and we’d fully recommend this fantastic culinary experience.

Disclaimer: we were given discounted tickets to the Sandeman’s New Europe Food Tour in exchange for an honest review. However as always, all pictures and views are our own.