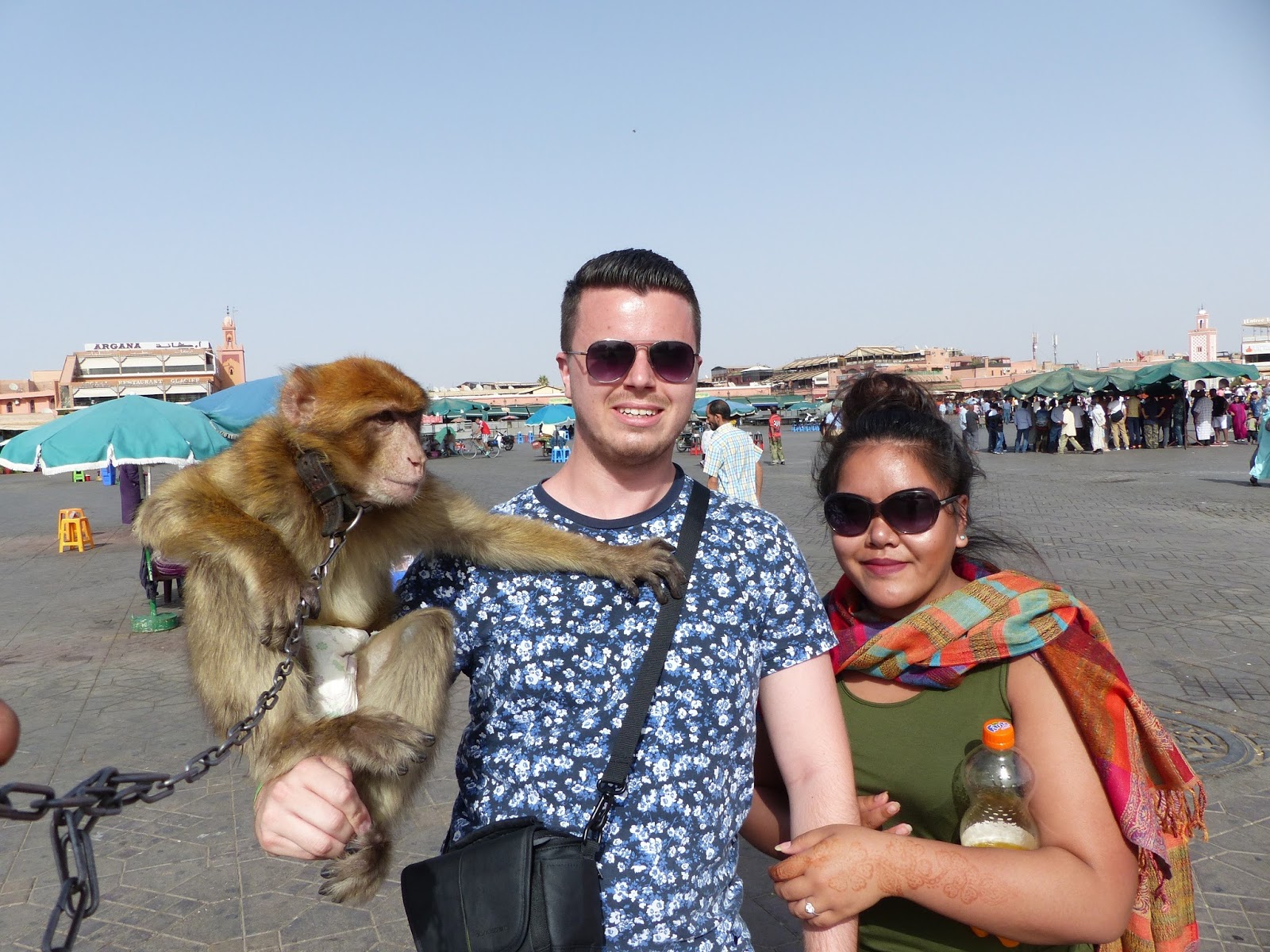 As every morning starts, we had breakfast and attempted to upload the photos for today’s post, today the wifi was being particularly slow for the morning. So we did the typical run though of our social medias and booked in our spot of the shuttle bus later on that day. We spent the morning swimming and sunbathing as per usual up until lunch time and before you knew it, it was time to head back to the room to get ready for another attempt at the markets.

Back in the markets:

I know, I know, what on earth are we doing back there? Well this is one of the most touristic places to go to when in Marrakech and to be honest, we felt it was a must do while we are here and to be honest, the journey and the walk towards the square was not bad at all, no hassle and was such a great start. Walking into the square we’d already been approached about getting on the horses and before you knew it a man was shaking our hands and shoving a monkey on our arms, although we got some great shots and footage, of course that was not the end of the motive, the man wanted money, of course we knew but we didn’t ask for it, he didn’t even give us a chance to say no, we didn’t have the amount he ask for and to be honest, what he was asking for was way too much. 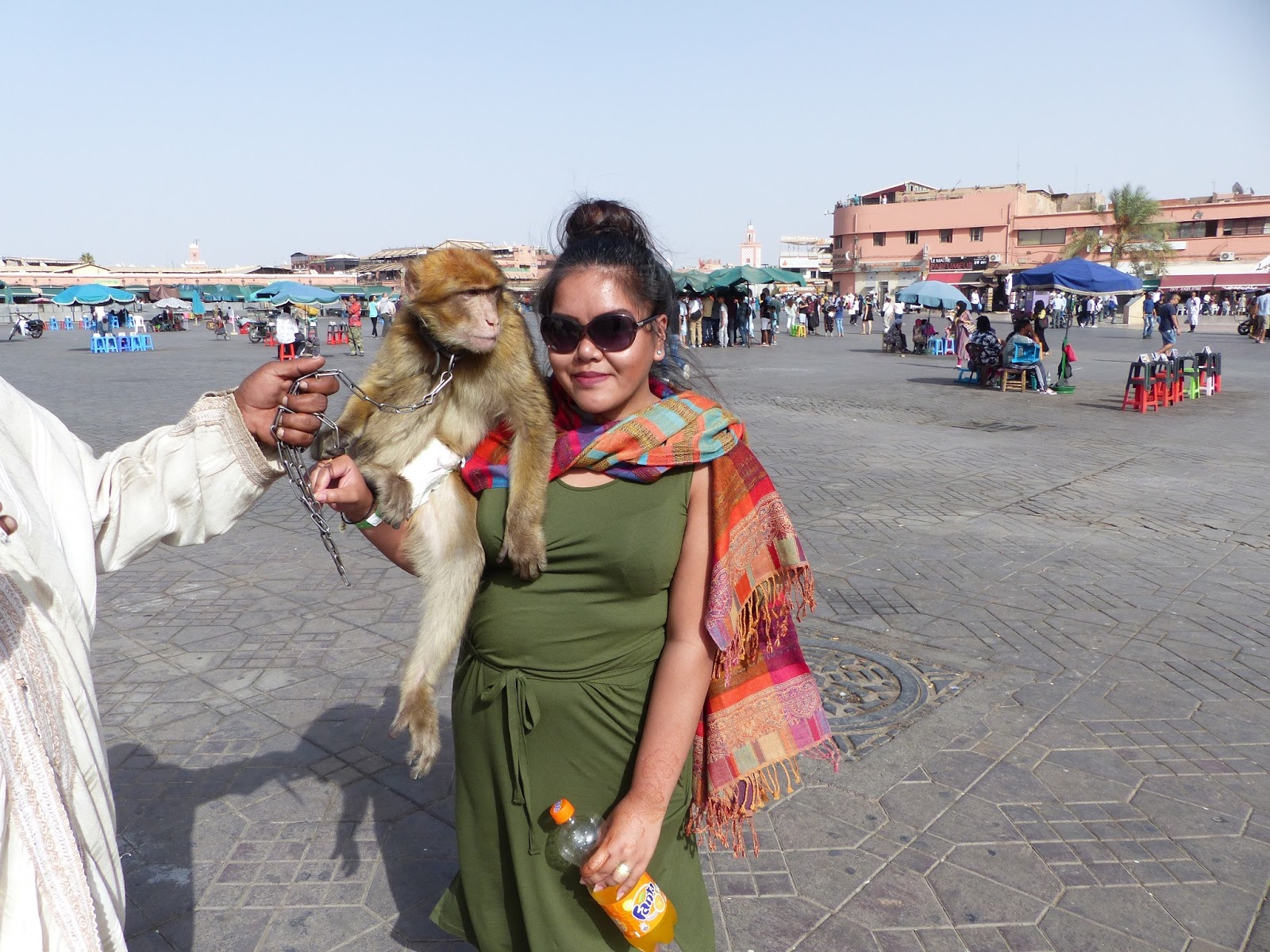 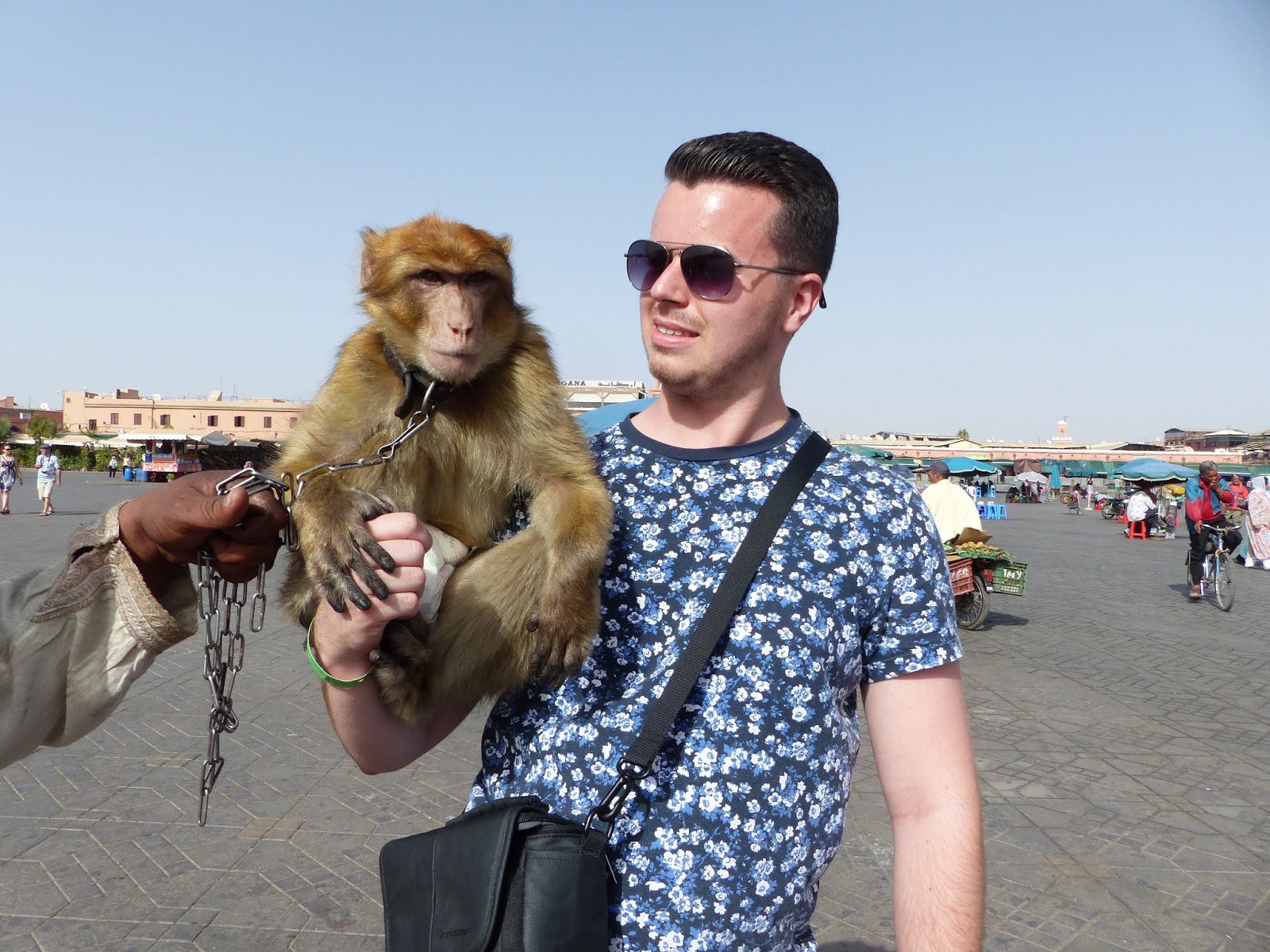 As we walked in further, all the feels from the previous days came rushing back, with a man following us pointing at my Fanta bottle, I wasn’t sure what he was asking or if he wanted it, how was I to know and I just couldn’t walk in any further. All we can say is we tried, we didn’t aim to buy anything, just for the experience and it was enough for us. We headed back onto the main road to our next destination.

La Mamounia, this was of course on our list of places to visit. One of the most prestigious hotels around! We decided before coming to at least have a drink at the bar, little did we know this would have turned into a little business trip – long story short, the company I work for in London, may or may not be working with the La Mamounia casino and there was a little mishap with delivery and it was just a coincidence that I’d be there and thought I’d do a favour and pick it up. This ended up becoming an advantage to our trip as we slightly knew James was not dressed for entry, yes, there is a dress code to enter the premises, it’s that prestigious. 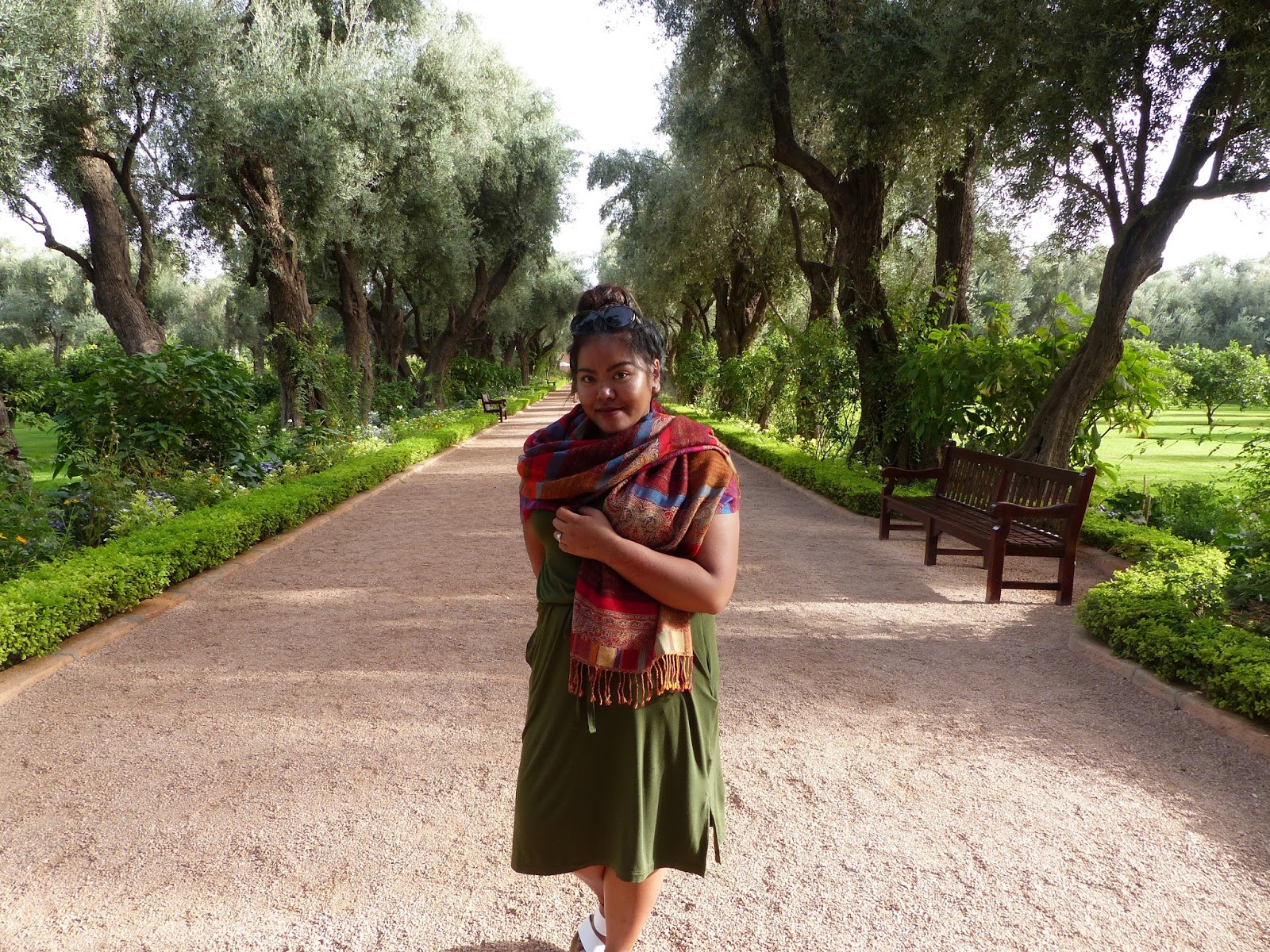 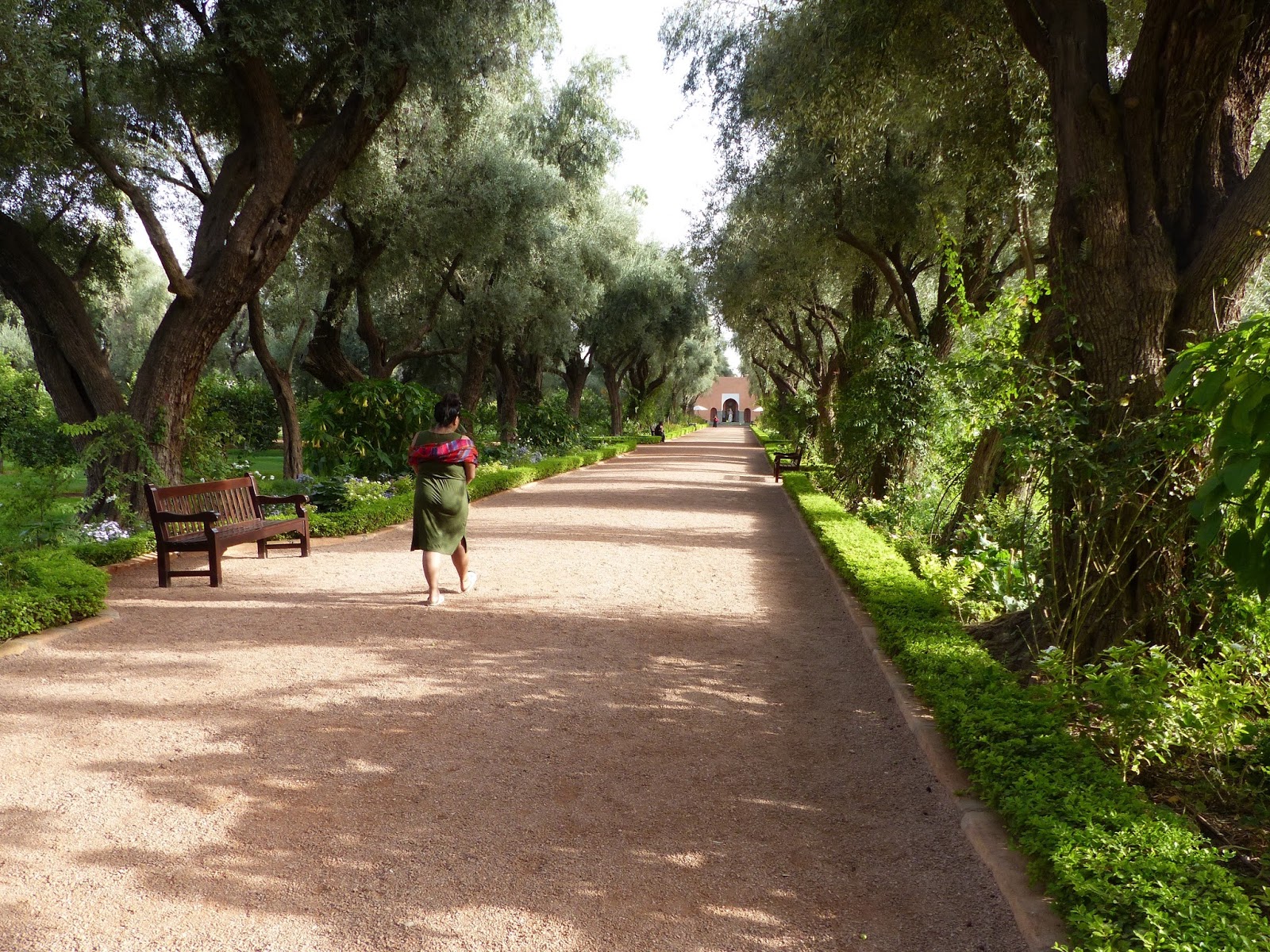 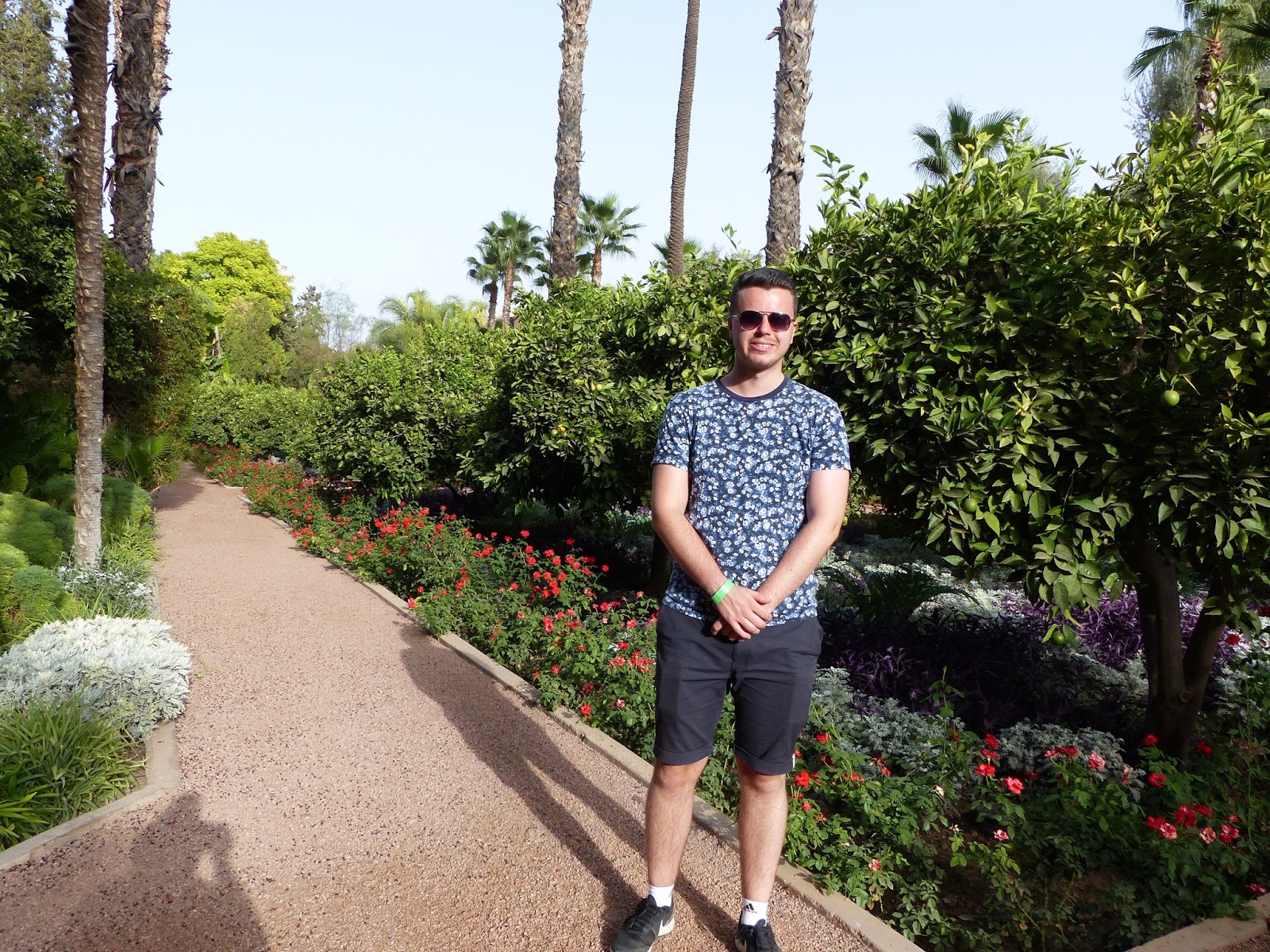 On arrival and after a brief explanation, we’d be directed to head straight into the casino. Unfortunately, the lady I needed to be in contact with was not working and this whole mess happened, the other workers had no clue on what I was on about and sent me to the hotel reception. Again, they had no idea, so after going back to the hotel, phone calls were made and numbers were exchanged. I refused to leave without the package as we were not planning to come back and this would have been a waste of a journey; but since we were in, we decided to walk around the hotel and explore, we now understand why it holds such a prestigious title.

Waking through the gardens and taking enough pictures, we headed to the outside seating area for drinks, but then was told there is a dress code after 5pm and we were sent to the back of the gardens to the Tea Room, where they may accept James’ attire and so they did. 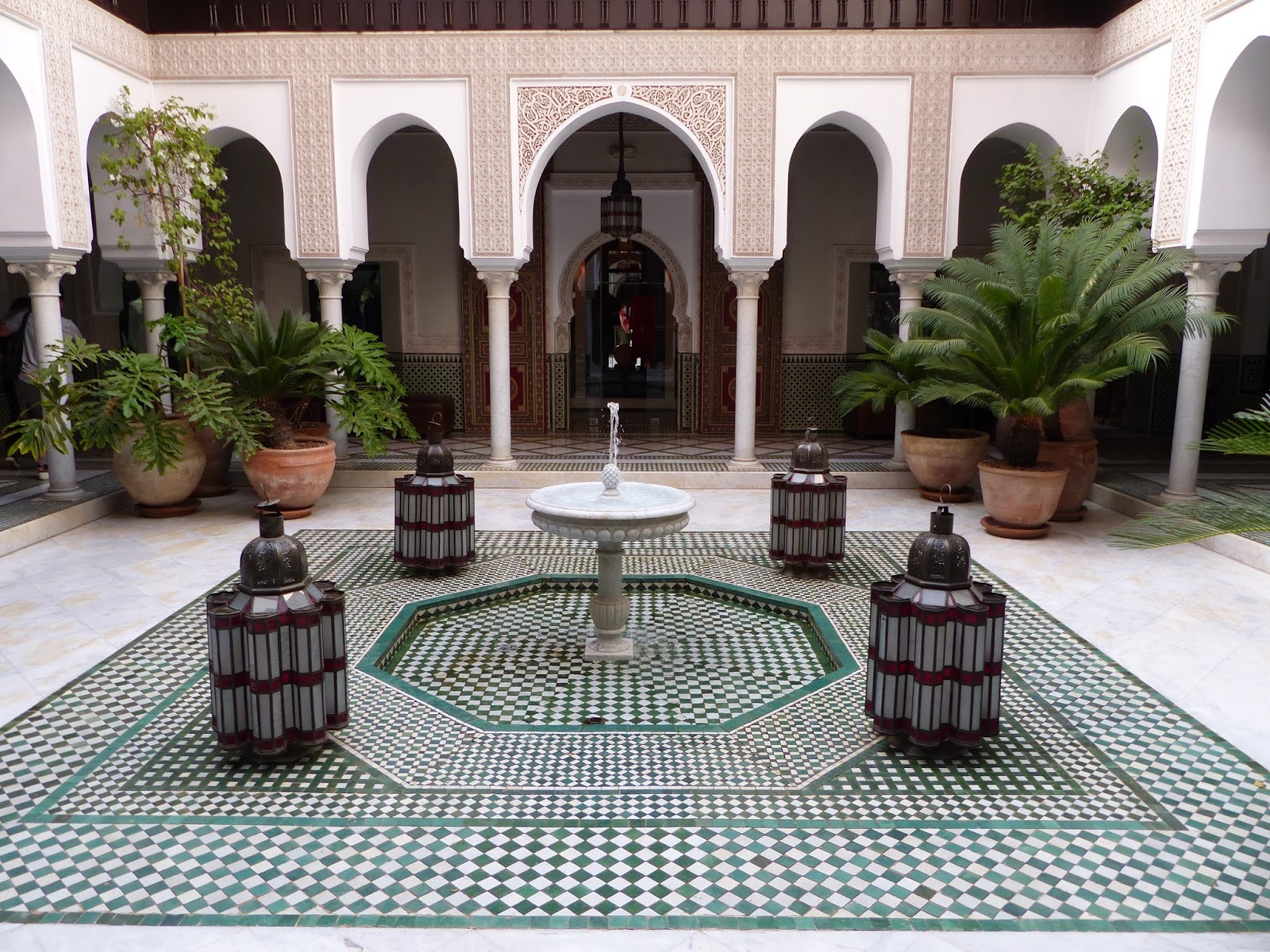 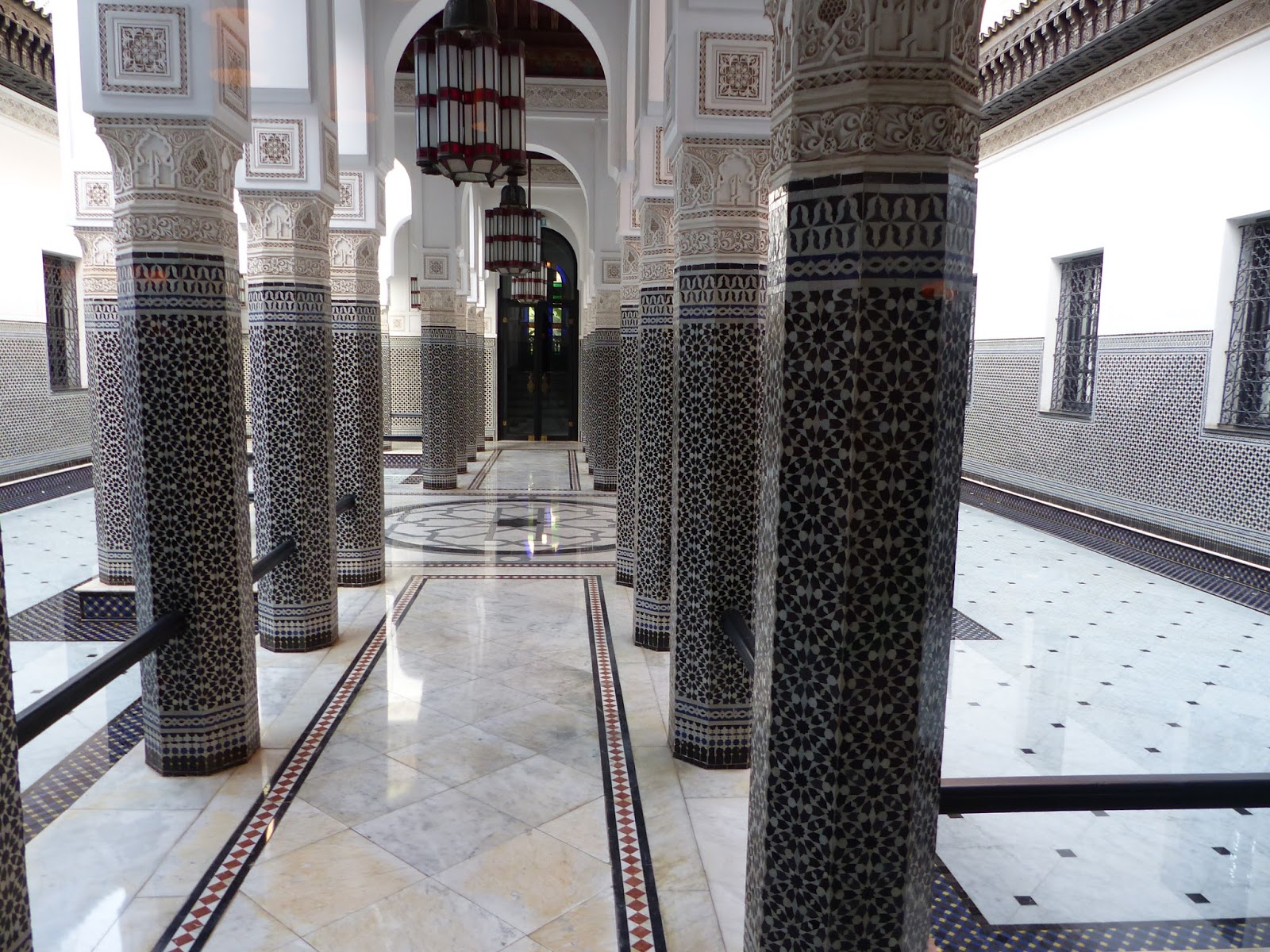 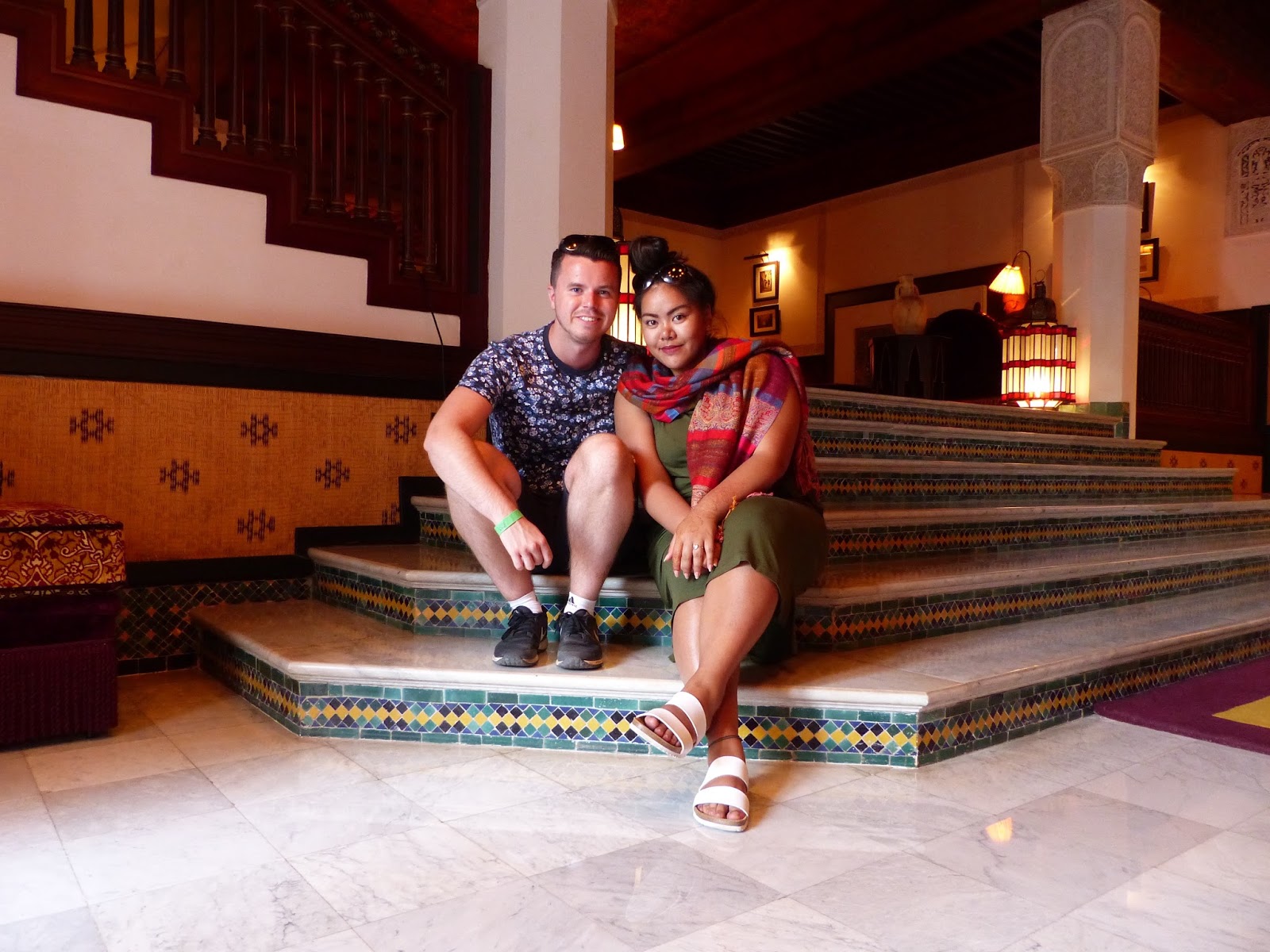 We originally came for an alcoholic beverage, but we were mesmerised by the thought of ice cream and coffee (coke for me) which turned out to be the best ice cream ever! During this, I had received a call from another lady from the casino asking for my whereabouts and luckily we chose to hang around, as soon as we were finished, we went to the casino and collected the package. So it was a win win for all, to be honest. The visit to La Mamounia was such a treat and such difference to the markets just around the corner. 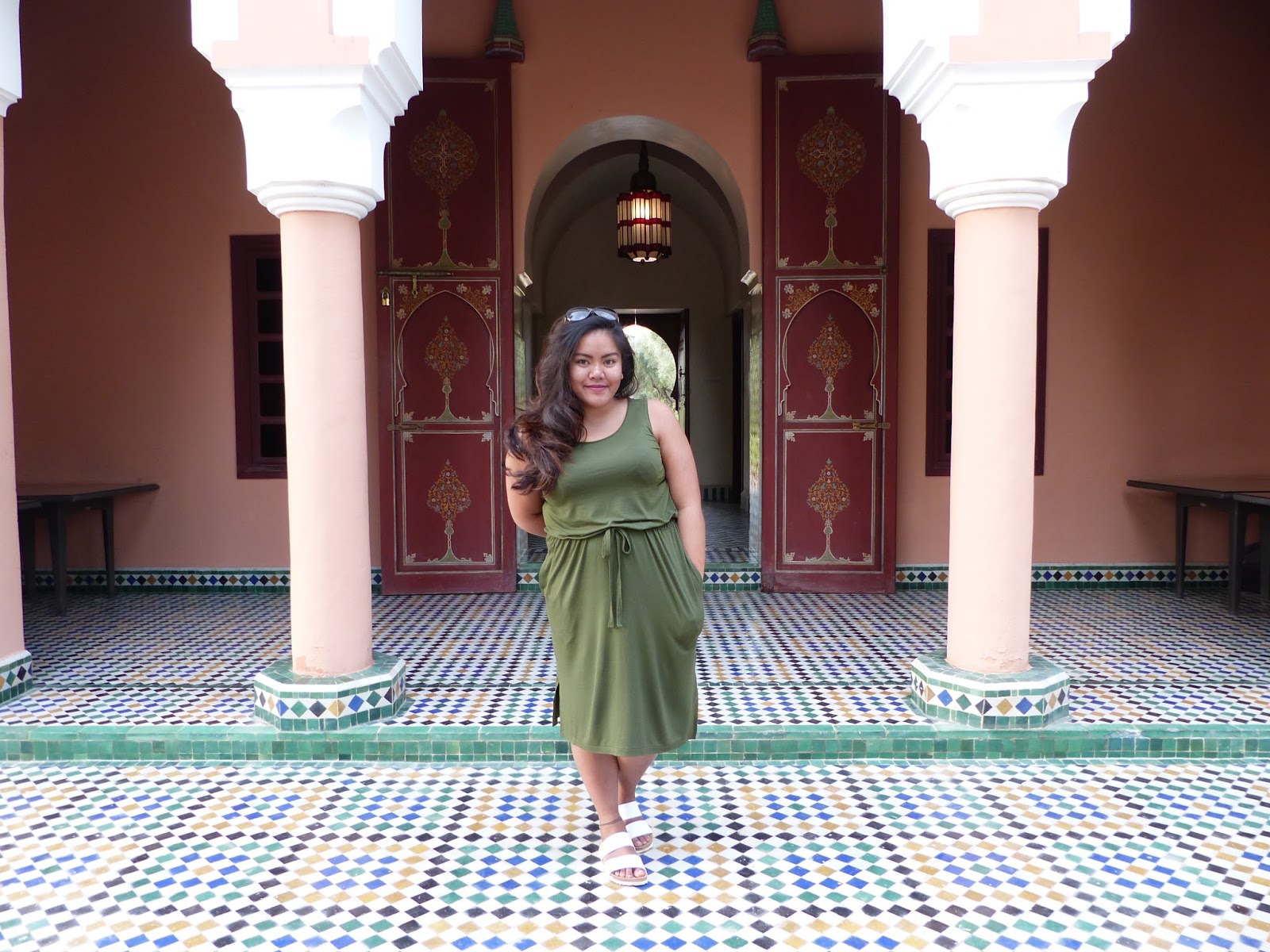 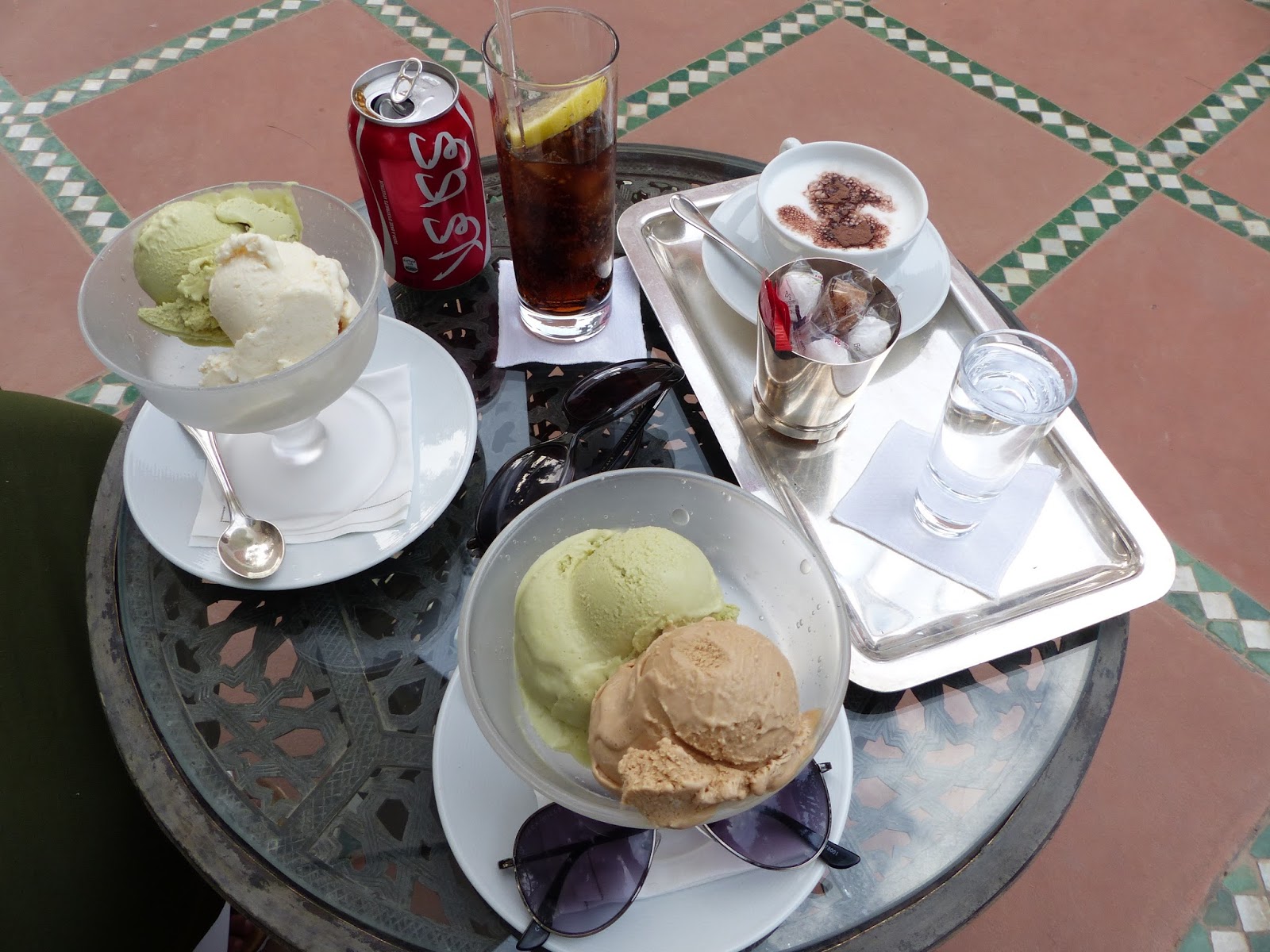 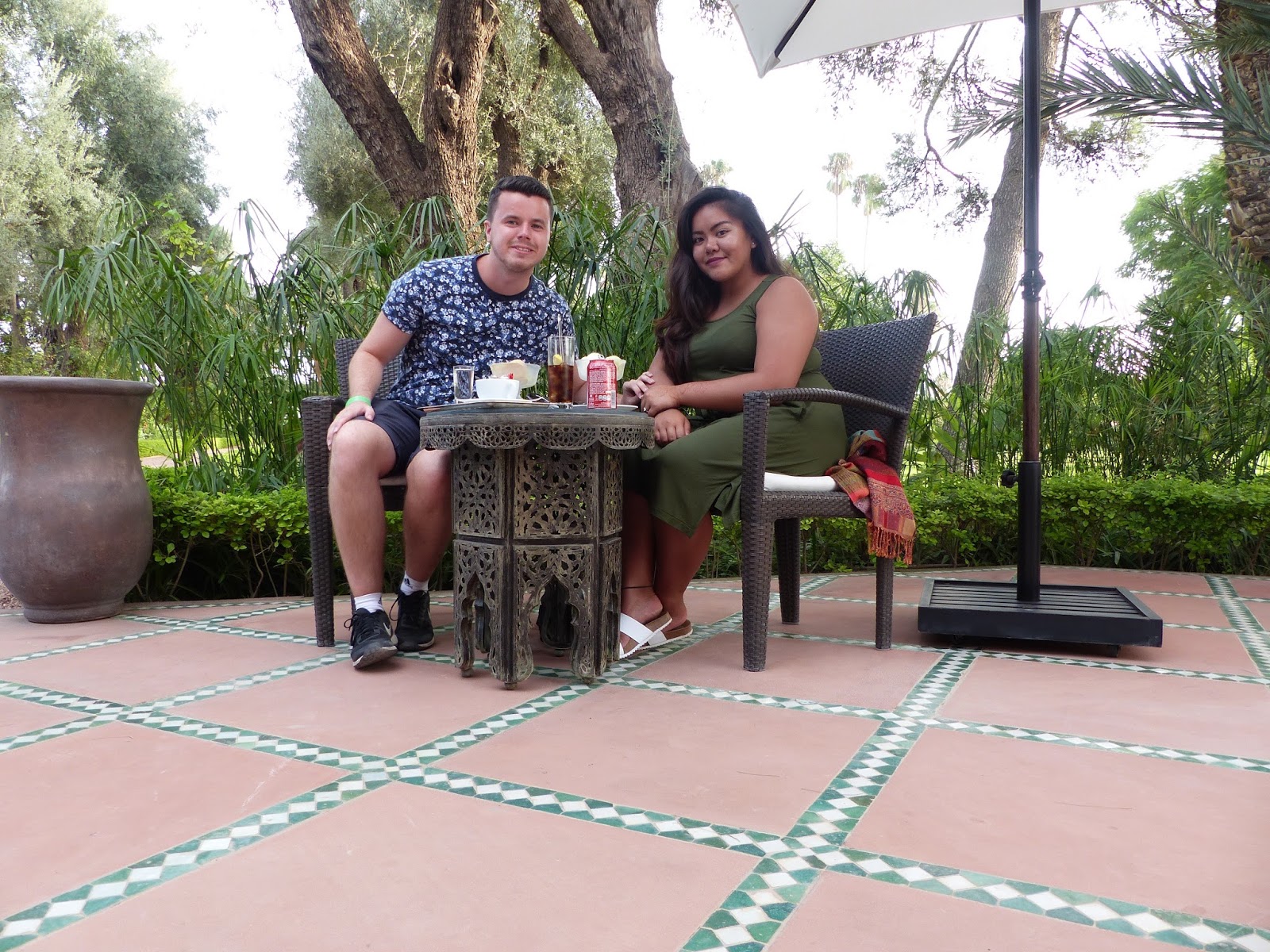 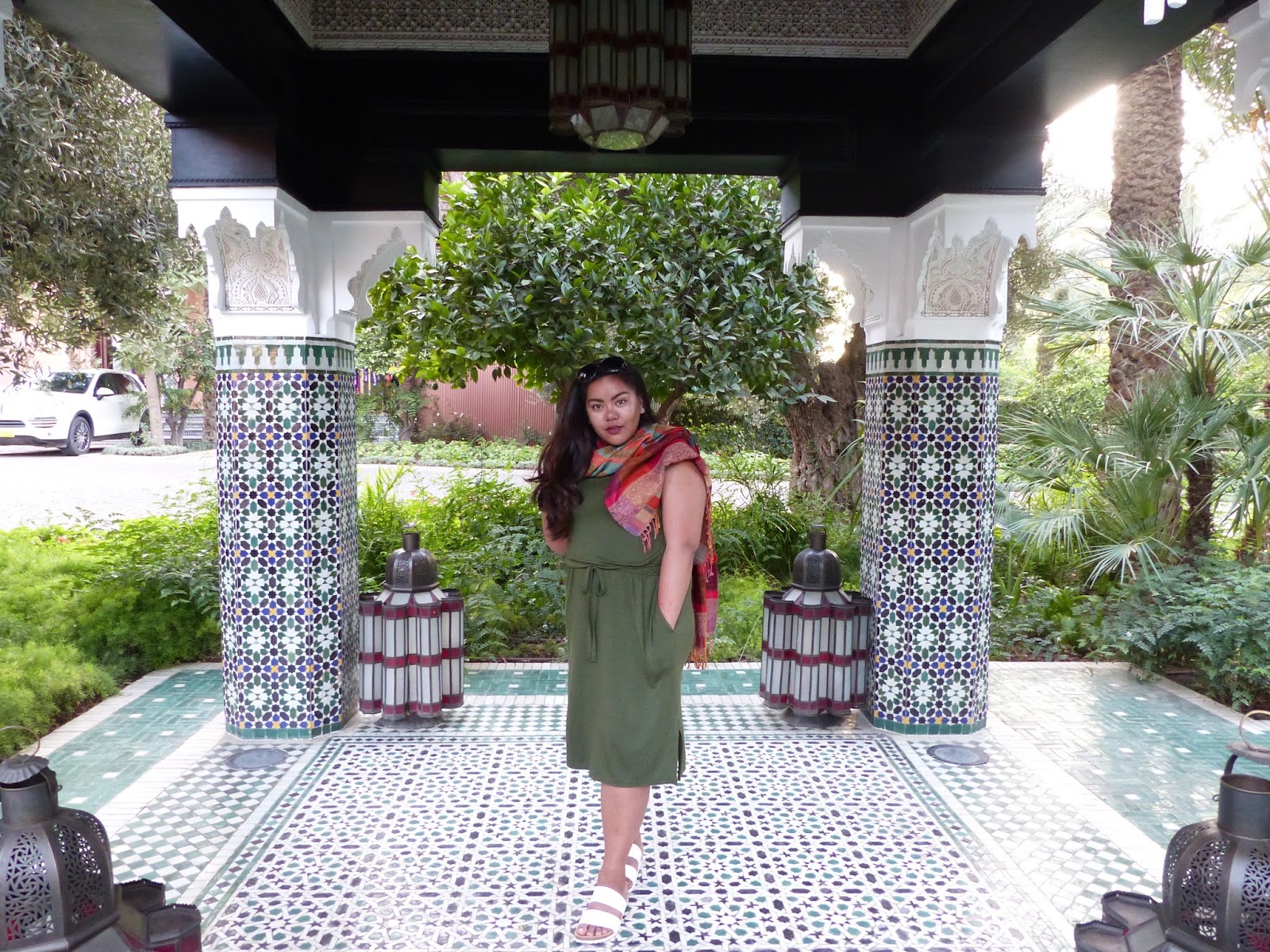 We hope you’re loving our holiday summaries so far and are eager to see out vlogs.